Home > God's Word > Rising from Bitter to Behold the Begotten 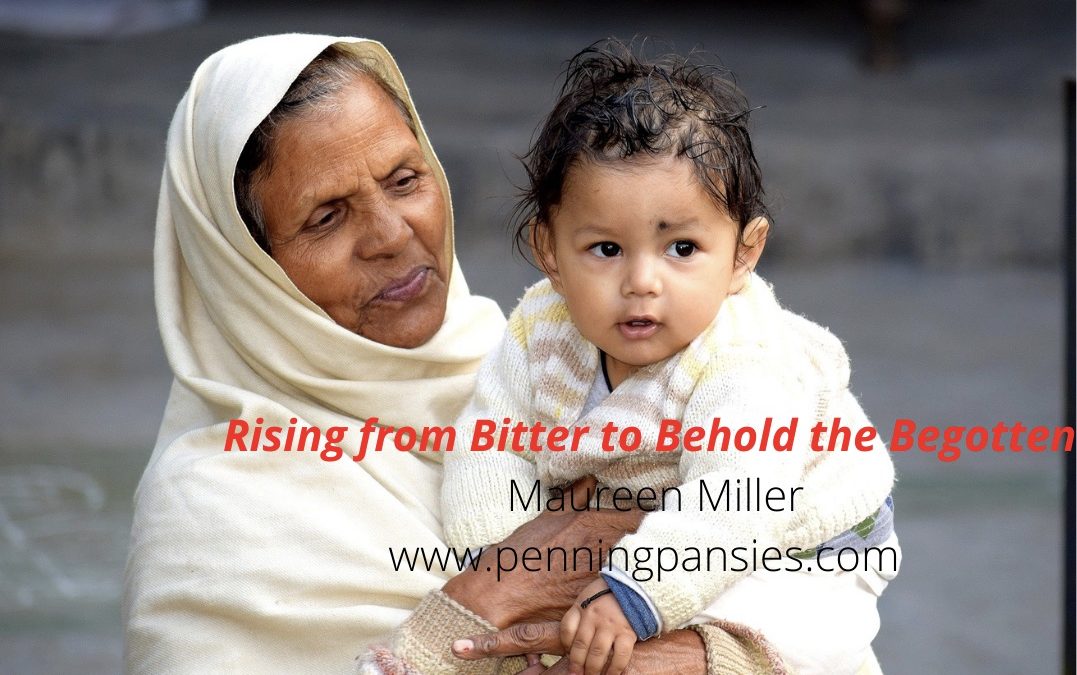 Rising from Bitter to Behold the Begotten

This is a personal portrayal of Naomi, Ruth’s mother-in-law. To read the entire biblical account, see Ruth from the Old Testament.

How many times has my heart been broken?

The ash heap became a familiar place, I promise you. My wailing, too, to those within earshot. That’s Naomi, they’d say. Because they knew.

First my husband; then, both my sons. It was then that I began saying in a sardonic tone, “Call me Naomi no more. Instead, I’m Mara, because ‘bitterness’ is my name.” Sadness seemed to be my lot in life.

And what’s a woman to do? After all, a widow left with sons can survive. Even one son would do. But I had none. No more. Not after they’d been taken from me–first from my womb, then from my world. Their absence left me cynical, and I shook my fists at Heaven more times than I can count.

And there I was, still in what felt like a foreign land, even after all those years. Though Moab’s welcome was fair enough when famine struck Bethlehem, it had never been home, and I longed to return. After all, there was nothing left for me, apart from my daughters-in-law. And each being a Moabitess, I knew I must bid them farewell, though they were kind to travel a while with me. Dear daughters indeed were both Orpah and Ruth. But the time had come.

Those are the words I spoke to them, the sting of tears burning my eyes, making these women appear like watercolored apparitions on that dusty road. And though they bulked at first, in the end Orpah accepted my offer to return, and I’ll never forget her one last wave as she walked, turning just before taking that final bend in the path, then disappearing from my sight to a future I hoped would bring her a new husband. Yes, children too. That final glimpse of her was like seeing, one last time, my son, and her absence, though encouraged by me, left a hole in my heart. Such is the death of a dream.

It was then that Ruth faced me squarely, refused to go. And despite all my coaxing, my attempts to send her back to her gods, she clutched my cloak and cried out–

“Don’t urge me to leave you or to turn back from you. Where you go I will go, and where you stay I will stay. Your people will be my people and your God my God. Where you die I will die, and there I will be buried. May the Lord deal with me, be it ever so severely, if anything but death separates you and me” (1:16-17).

And that was that. With those words, Ruth had spoken a promise–proclaimed her plans, both present and future. And she claimed a permeant place in my heart, let me tell you. In that moment, I silently vowed to work to bring Ruth worth in what would be to her a foreign land. After all, she was leaving all that was familiar to embrace me, her one family member yet linked to the memory of her beloved. Sometimes I failed to remember that her heart, too, had been broken. The empathy we shared was a tender tendril, intertwining us so that one couldn’t find where I began and she ended. I was determined–together, we would blossom in Bethlehem.

So, as part of Jehovah-jireh’s providence, Ruth and I arrived at the beginning of the barley harvest. I’d thought long and hard over the course of those fifty, difficult miles–considered how best to enter back into a society I’d not been part of for more than a decade. After years of famine, food had been restored, and I prayed earnestly that God would, likewise, restore me to my people. But only, I decided, with my new name.

After all, the women there had known me as pleasant, but pleasant had been replaced by pain, and the lines on my face had been earned honestly. Marred was I, and that’s when I’d decided on Mara. As I said, I was no stranger to bitterness. To try and prove otherwise was certainly a waste of time, and frankly, if I was anything, I was pragmatic.

And that’s how I faced not only my people–those women I’d once called friends–but also the problem of two widows left without sons. We’d simply have to find a way to survive. Oh, never had barley been such a blessing!

Imagine my surprise when it was Ruth who came to me and suggested the very notion I knew to be a solution. As if taking the words right from my mouth, she’d said—

“Let me go to the fields and pick up the leftover [barley] grain behind anyone in whose eyes I find favor” (2:2)

Of course I blessed her as I sent her on her way. As I watched her go, I both praised the Lord, as well as breathed a prayer, asking Jehovah-jireh again to provide for her. For me. And because He’s a good, good Father, He answered by directing Ruth to the fields belonging to my late husband’s relative. Yes, the fields of Boaz.

Now, I’ve seen the love of a man for a woman in his eyes, and no matter how many years pass, I’ll never forget that look for me in Elimelech’s. So fueled by passion, yet intent on purity. That was the way of our love, and it served us well–brought us our two sons. Strapping young men were Mahlon and Kilion, and the same love burned in their eyes for Orpah and Ruth. Until death do we part. That was their promise. Until death did part, and their flaming eyes were forever closed.

As a mother who’d already mourned her husband, been laid out in long lament which was worse than death, imagine the stab of losing not one but two sons. And if my personal agony wasn’t enough–that gripping fear of what would certainly be a future wrought with poverty and shame–I bore, too, the pain of both Orpah and Ruth, for I knew all too well their grief in my chest.

When Ruth returned after her day’s work in the barley fields of my kinsman–when she told me of Boaz’s kindness, his command to his employees to treat her with compassion–well, I could nearly see the love in his eyes. It mattered not that they’d just met. A mother knows.

And though I knew, when Ruth told me of Boaz’s words to her, my heart fluttered just as it had fluttered when Elimelech’s voice was still new to me–as if, once again, I was given the gift of my beloved’s breath in my ear.

“May you be richly rewarded by the Lord, the God of Israel, under whose wings you have come to take refuge” (2:12).

That’s what Boaz said to her, but his words meant so much more. And that’s when I heard God whisper the plan of His protective covering. I simply obeyed.

How strange it must have seemed to Ruth when I instructed her one day, some time after my return to Bethlehem, to arrive unnoticed at the threshing floor where Boaz would be winnowing barley.

“Wash and perfume yourself, and put on your best clothes … When he lies down, note the place where he is lying. Then go and uncover his feet and lie down. He will tell you what to do” (3:3-4).

But Ruth’s eyes weren’t shadowed with clouds of confusion but only emitted light. They told of her trust in me, her mother-in-law, and she never even asked, “Why?” but simply replied–

Oh, I understand. There are traditions and details too many to count for someone outside my Jewish faith, but let me simply say that Ruth’s precise adherence to what I’m certain were, to her, odd instructions not only spoke of her trust in me but spoke, too, of her love for a God who’d grown familiar, despite her pagan upbringing. It spoke of the love she’d had, likely still had, for Mahlon–the boy who’ll live forever in a mother’s heart. And it spoke of the hope to which she held–desiring to, once again, know the love of a man.  To hear his voice. Feel his touch. See the passion, intent on purity, in his eyes.

She found all this and more in Boaz, our kinsman-redeemer, and it’s only the love and faithfulness of Jehovah-jireh–our Provider–that could have made it so.

And while I know in my bosom that there’s more to this story than my remaining years on earth will allow me to experience, I sense somehow that all this is for a greater purpose. All the death I’ve known has led to life. All the sorrow’s been turned to joy. All the pain is now–yes!–pleasant.

As I cradle this little one in my arms, I see in his face, in Obed’s eyes, a love that will lead him to beget, just as he’s begotten, and my mourning’s been turned to joyful dance as I rise to waltz with him in morning sunshine.

Read Ruth to see for yourself the hand of our Redeemer weaving a tapestry through time. How has He lifted you from the ash heap, turned your sorrow into joy? Give Him thanks for all His goodness in your life.

Jesus, thank you for coming in the line of David. You are our Rock and our Redeemer–our kind Kinsman forever. Amen. 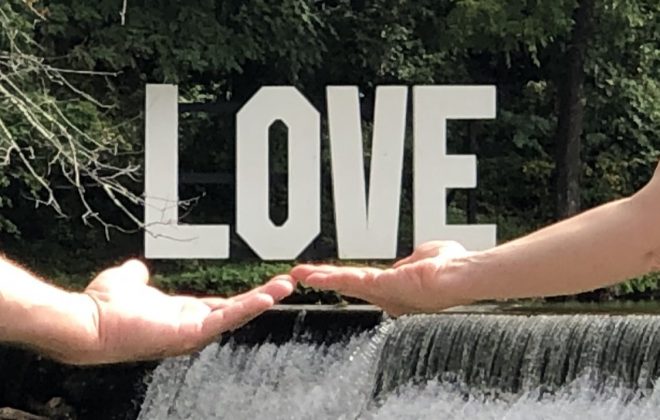 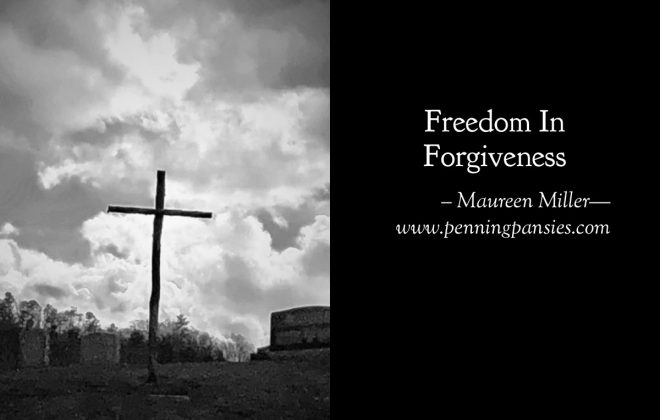