Home > His World > Lessons Learned from Linus and His Blanket 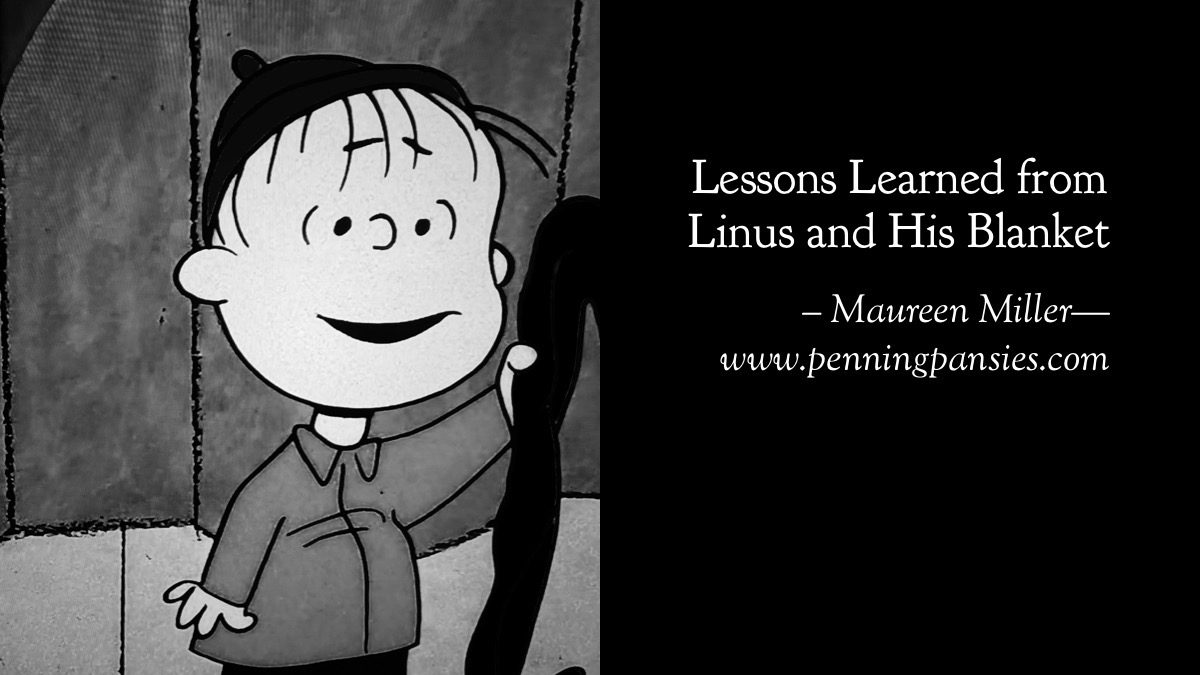 But if I narrowed it down, tried to pick my favorite one of all, I think I’d choose Charles M. Schulz’s A Charlie Brown Christmas. It has all the nostalgic feels as well as the tender true reason for Christmas. There are parts that still make me laugh–like when all the kids dance, something I usually have to get up from the couch to imitate–and parts that make me cry–as when Linus takes the stage and says, “Lights, please!” Furthermore, I just think it’s very theological, possessing some deep truths about humans’ response to the holidays in spite of Christmas’s true meaning. 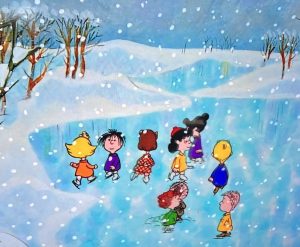 Much of what I really love about this particular Peanuts movie, however, is the lessons that are wrapped up, figuratively and literally, in Linus’s security blanket, and one must watch closely to discover them.

I believe there are at least four particular lessons to learn from Linus and his blanket, each having to do with the power of God’s Word to combat the enemy in his attempt to cover over the Christmas season with feelings of failed expectations, fear, and sadness. In other words, whether he meant to or not, Charles M. Schulz’s use of Linus’s blanket seems to be, though whimsical and childlike, as an object that depicts something deeper.

As Paul tells us in Ephesians 6–

In all circumstances take up the shield of faith, with which you can extinguish all the flaming darts of the evil one; and take the helmet of salvation, and the sword of the Spirit, which is the word of God… (vv. 16, 17 NIV).

Linus reminds a depressed Charlie Brown near the beginning of the movie that his friend is the only one who takes a perfectly good holiday like Christmas and turns it into a problem, namely because Charlie Brown is focused on the wrong things. This foreshadows Linus’s later explanation of the true meaning of Christmas, which comes near the movie’s end.

Not long after this scene, several children are trying to knock a can off a wall by throwing snowballs. Each fails in their attempts, and Linus then takes his blanket and makes it a slingshot to propel a snowball, hitting the can and knocking it over. 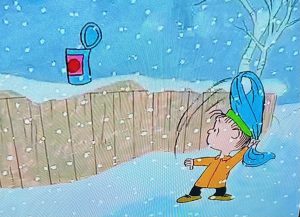 This seems a foretelling of the blanket’s purpose–as a weapon, much like the shepherd David who defeated the enemy Goliath with a stone propelled by his slingshot, not to mention the weapon of God’s Word as our sword of the Spirit

In an early scene just after he knocks the can off the wall with his slingshot-snowball tactic, Lucy pokes fun at Linus, asking what he’s going to do with his blanket when he grows up. He responds by stating that he plans on making it into a sports coat, an article of clothing that will cover his torso, front and back, and he demonstrates by draping it over his shoulders. 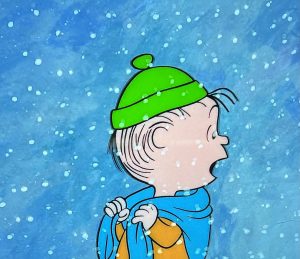 Perhaps a stretch, but this seems a childlike example of a shield of faith, with Linus’s plans to turn his blanket into a coat, which will serve to protect him when he faces more mature problems, dressing accordingly.

Lesson #3–Linus’s blanket is a protective helmet of salvation.

Near the middle of the movie, the gang has gathered on the stage to practice their Christmas play. Linus drags his blanket all around, never letting it go. Lucy hands him a script and tells him to memorize the lines. He complains, saying he can’t learn them so fast. Frustrated, Lucy threatens to punch him, and Linus’s blanket suddenly becomes a head covering. He says, “You wouldn’t hit an innocent shepherd, would you?” 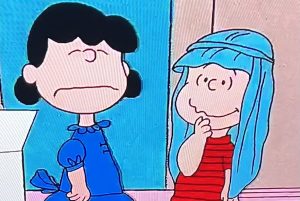 Again, his blanket has become a protective covering, much like a helmet protects and saves the one wearing it from the enemy’s attacks.

Lesson #4–Linus’s blanket isn’t needed when he brandishes the sword of the Spirit.

Near the end of the movie, viewers are given a glimpse of Charlie Brown’s shortcomings and how his so-called friends treat him. He’s been attempting to direct the Christmas play, per Lucy’s instructions, but to no avail. No one will listen or take direction from him, and he becomes frustrated, saying they need the proper mood. Yes, they need a Christmas tree! Linus goes along with Charlie Brown in search of the perfect one.

All the trees are aluminum, artificial and gaudy, much like Snoopy’s house, which, earlier in the movie, he decorated for a contest–something that further frustrates an already depressed Charlie Brown, fed up with all the holiday hype. There’s one tree, however, that is real–a small sprig with very few branches, its needles piling up in a heap each time it’s moved.

Choosing this one, they return to the school auditorium only to be met with shrieks of laughter from the gang, some of the children poking fun with words of incrimination, two girls even saying, “You’re hopeless, Charlie Brown. Completely hopeless.”

Charlie Brown, face to face with his failures once again, has come to believe the snide comments from his so-called friends who are really acting like enemies. He says, “Everything I do turns into a disaster,” before wailing, “Isn’t there anyone who knows what Christmas is all about?”

Quietly, confidently, Linus replies, “Sure, Charlie Brown. I can tell you what Christmas is all about.”

The lights go down, and Linus is alone on the stage. His trusted security blanket becomes a staff in his left hand as he clears his throat and quotes scripture, an indication that he’s memorized the passage. Remember–earlier, he’d said he can’t memorize his play lines quickly, but it’s obvious he’s hidden God’s Word in his heart.

“And there were in the same country shepherds abiding in the field, keeping watch over their flock by night. And, lo, the angel of the Lord came upon them, and the glory of the Lord shone round about them: and they were sore afraid. And the angel said unto them, Fear not: for, behold, I bring you good tidings of great joy, which shall be to all people. For unto you is born this day in the city of David a Saviour, which is Christ the Lord. And this shall be a sign unto you; Ye shall find the babe wrapped in swaddling clothes, lying in a manger. And suddenly there was with the angel a multitude of the heavenly host praising God, and saying, Glory to God in the highest, and on earth peace, good will toward men” (Luke 2:8-14 KJV).

After a pause, Linus concludes, “That’s what Christmas is all about, Charlie Brown.”

If one watches carefully, as Linus quotes Luke 2, when he comes to “Fear not” (v. 10), he drops his blanket. This act is not indication that he no longer wants his precious fabric friend but that the purpose for it, as a security measure, isn’t needed in that moment because God’s Word, a sword, is his security instead.

Although there are many other lessons one might learn from the timeless Charles M. Schulz tale–themes having to do with humans’ hunger for material possessions, as seen in both Lucy (who desires real estate) and Sally (who tells Santa in her letter that he can send money, $10s and $20s, in fact!)–these four lessons learned from Linus’s blanket are worth pondering.

They point us to the security discovered in God’s Word, and mostly, in The Word–Jesus–who was God made flesh to dwell in our mess. As Linus proclaims near the movie’s end, wrapping his blanket around the pitiful tree, “Maybe it just needs a little love,” so, too, the world. And such true, authentic, eternal love is only found…

And THAT, dear friends, is the Truest meaning of Christmas.

Merry Christmas, from our Gang to yours! 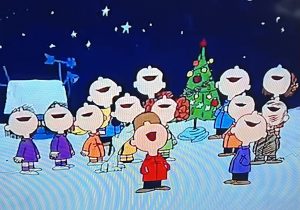 “For God so loved the world, that he gave his only Son, that whoever believes in him should not perish but have eternal life” (John 3:16 ESV).

Dear Sweet Savior of the world. Thank you for coming. Thank you for being The Word with us, even in our messy imperfection. Help us be You–Your hands and feet–in a world desperate for love. Amen. 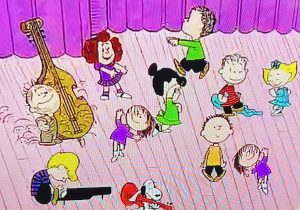 What’s your favorite Christmas movie and why?

(All pictures were taken as we watched the movie A Charlie Brown Christmas on our personal television. Here’s the link for Linus’s monologue.) 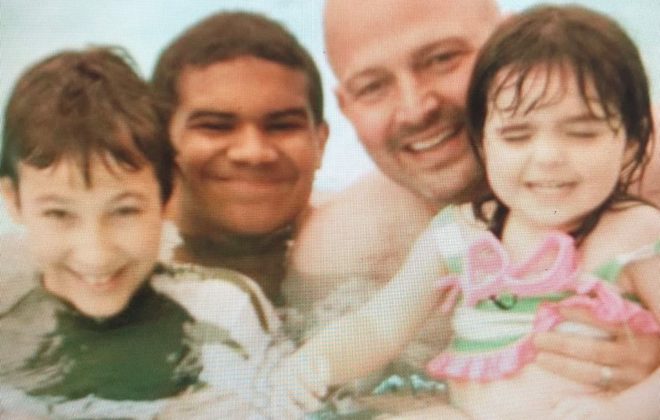 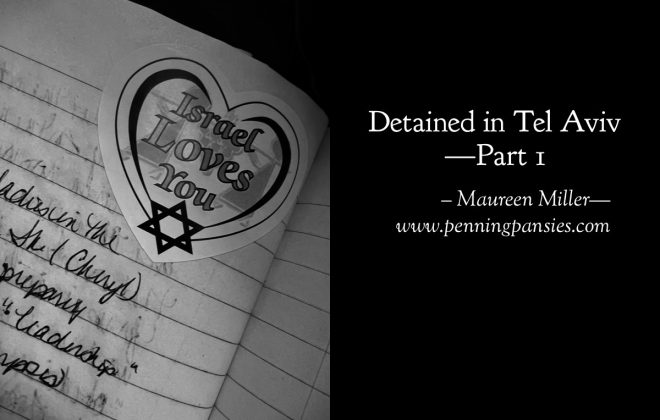 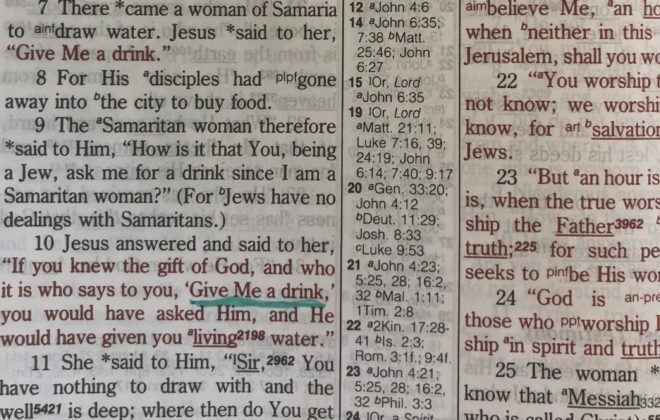