Home > His World > Donnie Harrison — Another Sort of Hero 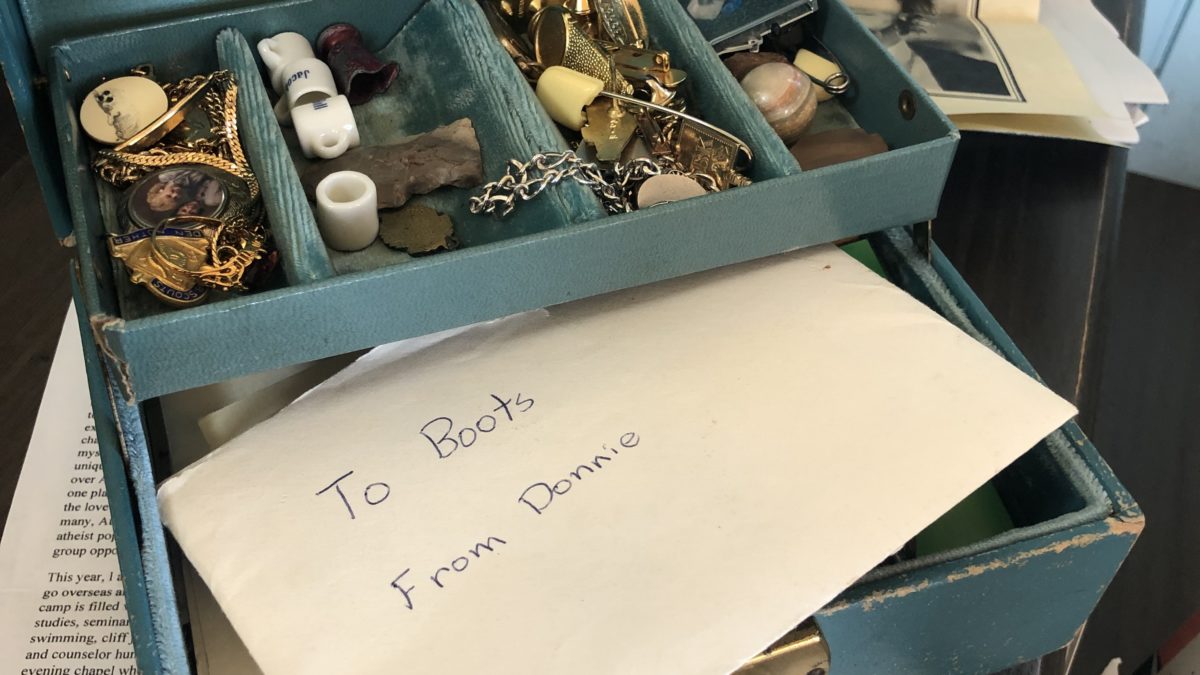 This morning, I tucked into Ian’s keepsake box several newspaper articles and the memorial bulletin from his heroic friend Riley Howell‘s funeral. 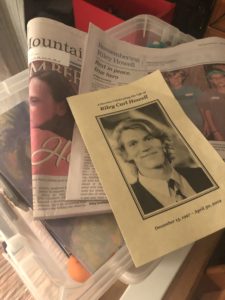 As I closed the lid, I thought, The loss of a friend is no small thing.

I know. I lost a friend when I was in the fifth grade.

I will never forget being woken by my dad who, at the time, was a practicing physician in our small Ohio community. He sat on the edge of my bed as I rubbed sleep from my eyes, springtime sunshine streaming through my bedroom windows.

I sat up against my propped pillow. The beauty of that May 5th morning suddenly felt shadowed by my daddy’s somber countenance. “Maureen, I need to talk to you,” he started. “Something has  happened.”

He paused long enough for me to prepare myself for what he was about to say. “Your friend Donnie Harrison was killed in an accident yesterday. I was at the hospital when the squad brought him in, but there was nothing that could be done.”

He said it as though he was somehow guilty — as if perhaps there was something more he could’ve done, as though his decade-old daughter expected him to do more. But she understood. Donnie had died, almost on impact — the motorcycle he was riding with his own dad having hit a tree on a curve in the road very near another classmate’s house.

I’m sure my face registered disbelief; after all, ten and eleven-year olds don’t die — not when spring flowers are in bloom, when children are preparing for summer vacation, not to mention the rest of their lives. All I knew was this day was my best friend Lisa’s birthday, a day to celebrate life, not to mourn its loss.

Daddy hugged me and reiterated that there wasn’t anything that anyone could have done. And somehow I must have risen from my bed to get ready for school, though the heaviness in my heart told me it wasn’t any ordinary Tuesday.

I was in Mr. Bell’s fifth grade class that year — one of what had been twenty-eight boys and girls who were all friends most days, with their fair share of squabbles and tifts, to be sure. But on this day, there were only twenty-seven, and I recall how we each walked into the classroom so quiet, so pensive — unpacking our things before finding our seats in a haze of disbelief.

Some hadn’t yet heard, but when two of Donnie’s best friends were found crying before the bell even rang, the news spread quickly. By the time our teacher stood behind his desk, his own eyes red and swollen, there was a classroom of bewildered faces staring at him — as if each child was holding his or her breath, hoping he’d announce that this was, after all, some sort of cruel prank. Then Donnie would enter, as if part of the game, to quietly take his seat. The day would  resume with normalcy then — with the Pledge of Allegiance and morning announcements. We’d make our lunch choice — then, relieved, slip easily into reading and math and social studies.

But that’s not what happened. Mr. Bell hung his head and cleared his throat several times before looking up at his expectant students. He then had the audacity to say what we’d all hoped was a lie.

“As many of you know, Donnie passed away yesterday evening.”

There was silence as this truth, proclaimed by our teacher, settled. Then a few students whimpered, several began to cry. And at a loss for words, Mr. Bell did something that wasn’t common, even in the early 80s. Honestly, I think he, too, was grasping for hope. He looked out at his students and said, “I… I think we should all say The Lord’s Prayer,” and we obediently bowed our heads — some knowing the words, others not. It didn’t matter. We each beseeched God earnestly in our hearts, many in unison until the very end.

… deliver us from evil. For Thine is the kingdom and the power and the glory forever. Amen.

Wait. No — not one of us had agreed to Donnie’s death, despite that word “amen” (so be it ) punctuating the end of our prayer. That wasn’t at all what we meant, and even today — thirty-eight years later — it feels almost like a trick.

What we wanted was for God to fix it, to make it not so, to take it back by reversing time, to keep Donnie from asking, “Daddy, can I come too?” when his father prepared for that fateful ride.

I’m sure most of us prayed believing — with the folded hands of faith — but still, Donnie didn’t appear at his desk, his pencil box before him ready for the day.

Once we realized his chair would remain empty, we memorialized the moment by passing around a piece of paper — where everyone could sign his or her name, to remember that we were together, twenty-seven classmates and Mr. Bell, on that day we said The Lord’s Prayer in our public school classroom, in loving memory of our friend Donnie, who passed away on May 4th, 1981. 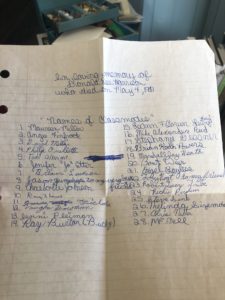 And then somehow, we moved on from that moment to math and reading and social studies — on that day and each day after, until we came to the end of our school year and met summer with the smiles of resilient children who marched on, journeying with joy despite pain.

Today I retrieved my own treasure box from its place on the shelf. Inside is an envelope containing a Valentine from Donnie the year he died; the memorial paper each of my fifth grade classmates signed; and Donnie’s funeral bulletin with his school photograph stapled to the front. 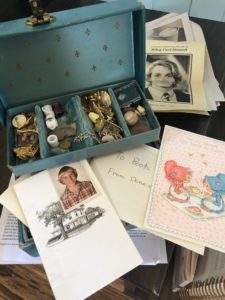 And I’ve been thinking. One rarely forgets true friends from his or her youth — those who made a difference, even in as simple a thing as a Valentine and a school picture.

There are all kinds of heroes in life, and as Riley Howell’s parents recently shared in an interview, it’s simply choosing to “do the right thing.”

Donnie Harrison was kind to a girl whose nickname was Boots — though sometimes others were mean, calling her “Whitey” and “Albino,” because she had blonde hair and fair skin or “Elfie,” because her ears stick out when not held back by a headband.

Yes — Donnie was my friend, and that is indeed no small thing.

Dear Jesus, as we remember heroic friends who made a difference, help us to also remember that there are just some things in life that don’t make sense, because we’ve not yet been fully “delivered from evil.” As Pastor Blackburn reminded us Sunday at the celebration of Riley Howell’s life, there is no suffering that You haven’t also endured. So let us, “experience the depth and breadth of the love of God” — then love others like that as best we can, remembering that with you, kind Savior, we have this eternal promise until things are as You intend… 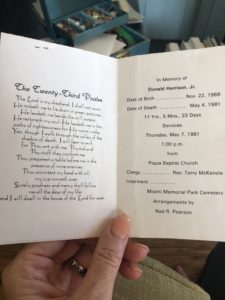 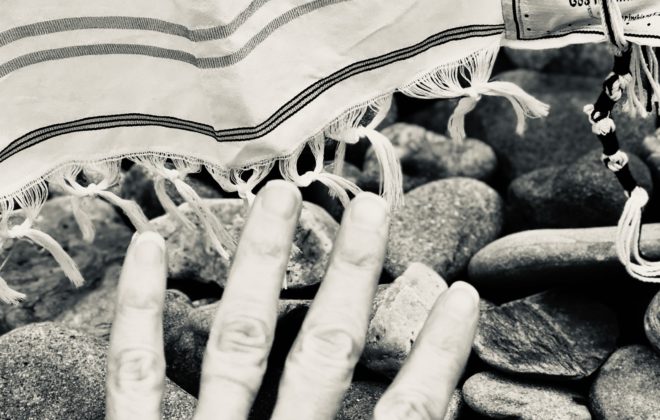 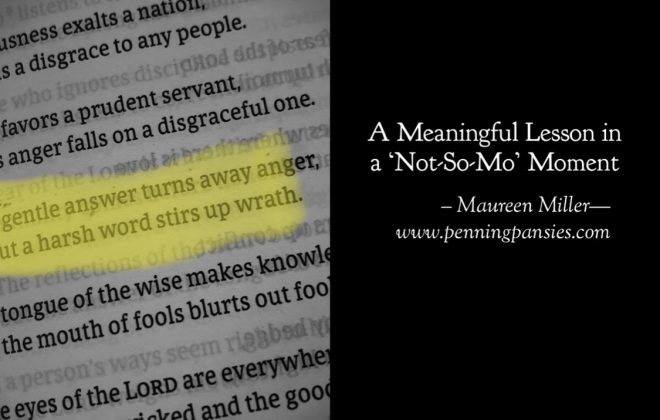 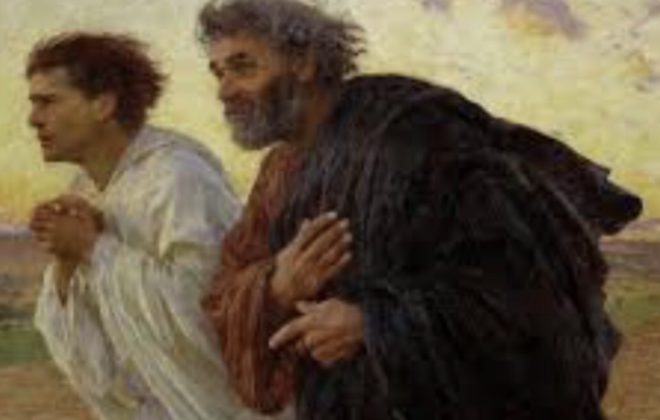 When We Don’t Know