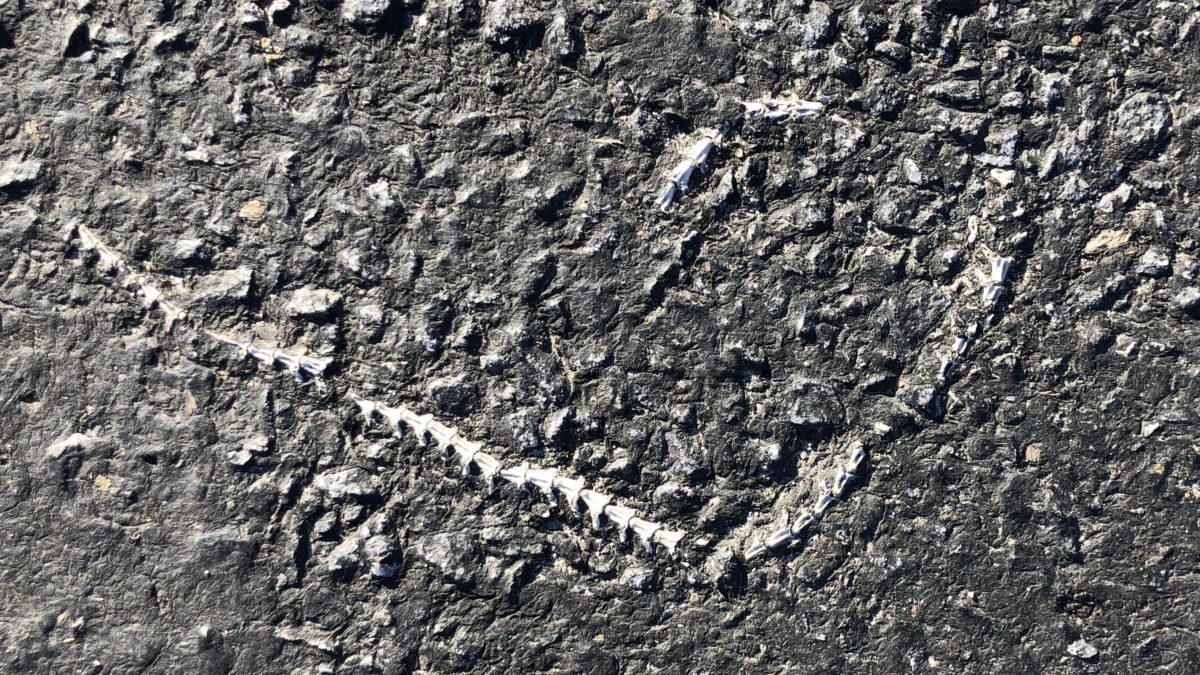 On Halloween, my husband and I took a walk. At the end of our road, I saw something that had gone unnoticed before. It was the vertebrae of a snake that had evidently been hit on a hot summer day–its form pressed into the then soft asphalt of the road where it remains encased, even now, though the days have grown colder. 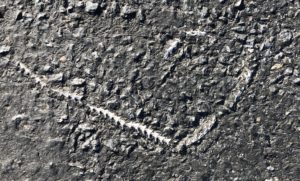 Entirely harmless, it still made me jump a little. After all, I’m afraid of snakes, but it got me thinking…

What is it about humankind that, at least for many, drives them to pay big bucks to get scared–at horror movies, in haunted cornfields, in haunted houses, at Halloween parties?

I recently learned of a horror attraction in Tennessee that promises to pay $20,000 to any participant who makes it through the 10-11 hour spook show. (That hasn’t happened yet.) McKamey Manor in Summertown touts terror beyond anything anyone has ever known–taking thrill-seekers through a hair-raising experience that, according to owner Russ McKamey, “taps into each guest’s fears in order to give them an experience of heightened terror… often [using] hypnosis to do that” (www.southernthing.com–article by Amber Sutton on 10/23/19).

I can’t even imagine. Truly.Cannot.Imagine.

So, my kids say I’m overly sensitive to scary things. That may be true, but I just can’t fathom ever paying others money so they’ll make me run screaming wildly, with absolutely no control over my bodily functions.

Call me a prude, but I’m sorry. In the words of the witty (and yes, wonderfully wise) Heather Land–the comedian known for her “I ain’t doin it” monologues–I would rather… lick the floor of a ladies’ rest stop restroom than pay money for someone to make me wet myself (or worse).

I remember as a child of eight or nine attending an October overnight with my Girl Scout troop at a local YMCA. Sounds innocent enough, right? As we ate pizza and played air hockey, a rumor circulated that, later that evening, a group from an area haunted house was coming to scare us. It was near Halloween, after all–and what little girl doesn’t enjoy being chased around a dark room by a bunch of grown men dressed in werewolf and mummy costumes? (Really?)

Early on, even I joined in with the somewhat scary yet slightly titillating talk–giggling with the cookie-selling, badge-earning gaggle of girls at the thought of the possibility of such impending doom.

But around eleven–when we were just beginning to yawn and stretch out on our sleeping bags to whisper in pjs, perhaps even tell a good ghost story or two, before drifting to sleep–the YMCA’s basement youth center became, in the blink of an eye, a haunted house. That’s when this little girl huddled with several others in a space assumed to be a sort of “Base”–her eyes closed tightly, hands over her ears, in an attempt to shut out the terror.

At one point, I felt a brush against my arm. Opening my eyes–believing the space within which I sat to be safe–I saw a large white werewolf squatting beside me, trying to coax me into joining in with the others who were seemingly having the time of their lives. I may have punched him before I stuck my head under my troop leader’s shirt and hid there until the danger had passed. (I’ve often wondered what that poor woman must have thought, feeling my hairy head pressed against her bare back. Talk about horrifying!)

Understandably, to this day I’m scared of people in costume and would never visit a haunted anything, nor do I understand anyone who does. Sorry (not sorry).

That’s not to say I didn’t willfully do things that caused damage, adding to my phobia. After all, I did watch my fair share of scary movies as a teenager–at girlfriends’ slumber parties and with my boyfriend (now husband). I did, and perhaps that’s part of the problem, because even hearing the theme song to “Friday the 13th” sends me into a panic–envisioning Jason in his hockey mask standing right behind me, wielding a knife. Such a thought makes this 50-year old flee from a dark room, imagining she’s certain be his next victim.

Needless to say, Halloween isn’t my favorite holiday, though autumn is my favorite season. Thus, we don’t decorate like many–don’t create faux cobwebs to hang in the corners of our porch or hang little orange twinkle lights to spread October 31st cheer. Instead, we decorate with a plethora of pumpkins and gourds, a scarecrow or two (That’s the scariest thing there is!) and autumn wreaths. Mostly, we celebrate my mom, whose birthday happens to fall on October 31st–giving us plenty of good reason to eat sweets and have a party.

All this said, there is just something inside each of us that sort of relishes the ominous–those dark and scary things that make us quiver, run and hide. Perhaps it’s simply the sin nature–a willful part of humankind that enjoys (though we’d never want to remain there) touching the forbidden, testing the boundaries, tasting the fruit from that one tree–the Tree of the Knowledge of Good and Evil–which God forbade, forewarning, “If you do, you shall surely die” (Genesis 2:17).

From the beginning of time–since Adam and Eve–there’s been that part of us that wants to go its own way, do its own thing–although, personally, I’d have run simply at the first sight of the serpent.

Perhaps that explains, at least in part, the excitement surrounding a holiday that, at its root, encouraged the appeasement of ghosts and ghouls by the Celts just prior to their New Year–when the boundary between the living and the dead was obscured and thus, was tested.

This might also explain why, as a child, I loved a particular photograph in my copy of The Way–The Living Bible (Tyndale House Publishing, Inc., Wheaton, Illinois, 1972). I’d turn there often–fixated by the image of a skeleton and other scattered bones–all as dry as the desert where the prophet Ezekiel heard a message from God. 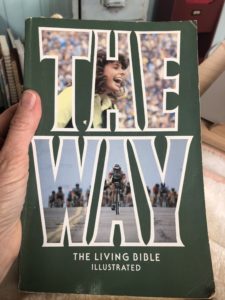 This picture is part of The Way’s introduction to the entire book of Ezekiel–likely because the prophet’s story of the dry bones is, not surprisingly, the one that’s most well-known in this particular Old Testament book. 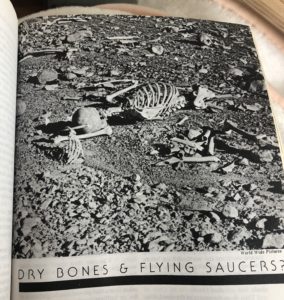 In chapter thirty-seven, God speaks to His prophet–asking Ezekiel if he believes God can bring life back to the dry bones in the desert, to which he replies–

Then the Lord tells Ezekiel exactly what to say and, following God’s direction, the Son of man speaks to the dry bones.

Imagine the eerie scene. Ezekiel hears a rattling noise across the valley as hundreds and hundreds of dry bones come together to create a vast army. First, they rise; then muscle and flesh grow; then skin covers them; and–after speaking to the four winds–the forms begin to breathe, new life in their lungs.

If I’d been Ezekiel, I imagine I’d have run away. Before him stood a very great army where, only moments earlier, dry bones had been. Then God explains to His prophet–

These bones… represent all the people of Israel. They say: ‘We have become a heap of dried-out bones–all hope is gone.’ But tell them, the LORD God says: My people, I will open your graves of exile and cause you to rise again and return to the land of [promise]. And, then at last, O my people, you will know I am the LORD. I will put my Spirit into you, and you shall live… (Ez. 37:11-14–The Living Bible).

And therein lies the key, because with only a word from God–the comfort of His promise–there’s hope.

So even though I don’t think this justifies inviting the scary into our lives–after all, we’ve been exhorted by Paul to think on things that are true and lovely and pure (Phil. 4:8)–I do feel a tad more courageous when I’m reminded that I carry the Spirit of God in my heart and wield the Sword of the Spirit (His Word–the Bible) as my weapon in times of fear.

And perhaps I’m one step ahead of Eve in the battle of sin, because at least I’m still afraid of snakes–even ones that are simply a pile of dry bones.

Still, with all this hope, you won’t find me at a haunted corn maze or mansion–even with my Bible filled with His promises.

Because, frankly, the LORD God knows…

I ain’t doing it! 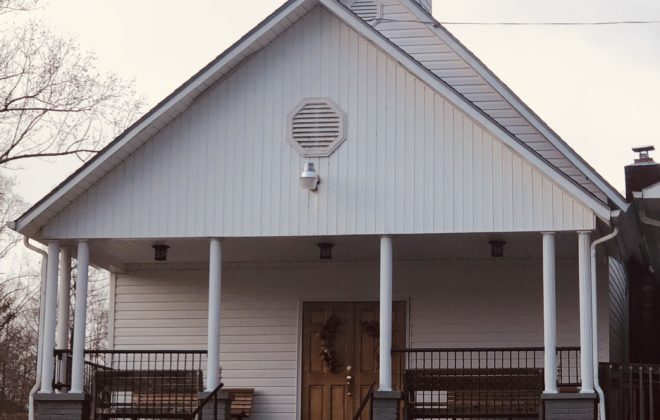 His Beautiful Bride — An Allegory of The Church 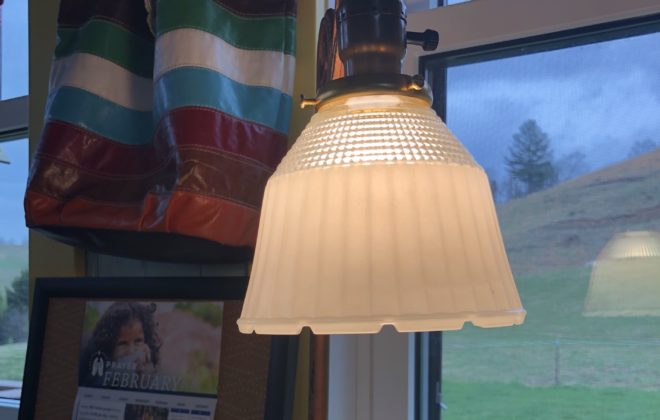 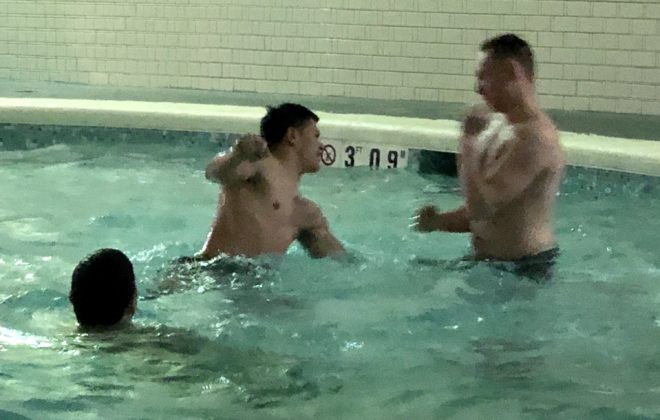