Home > His World > The Night Before Christmas–Part 2 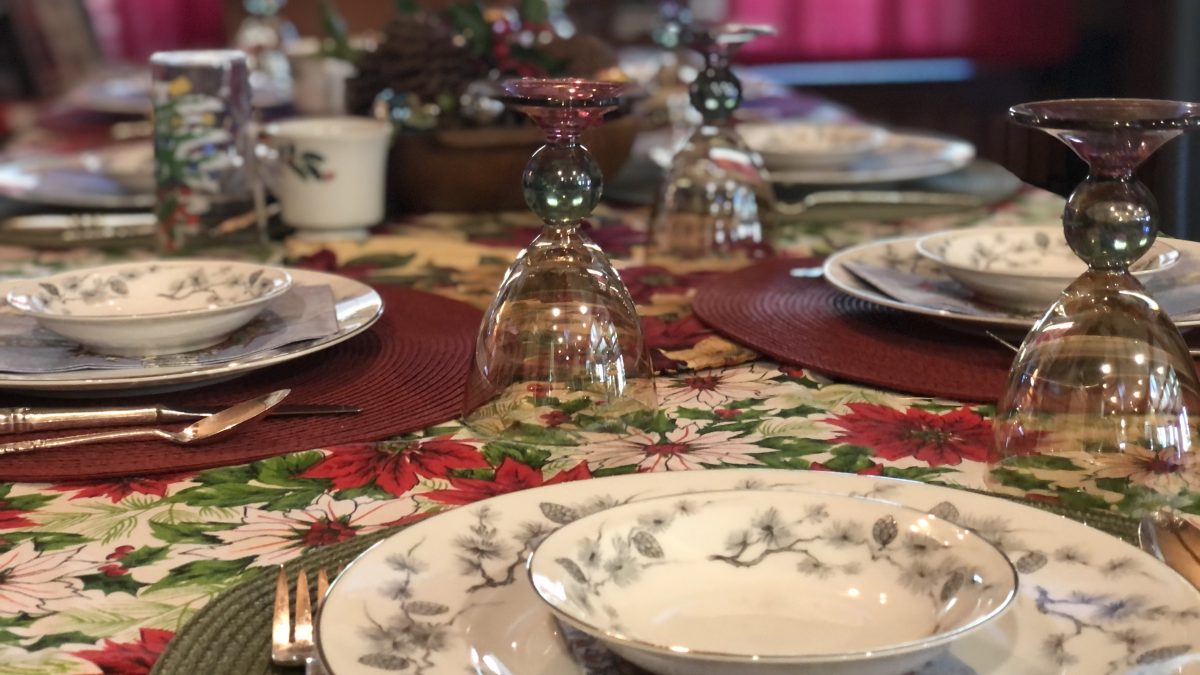 The menu was determined. The food purchased, then prepared.

What was unplanned, unexpected, were the added guests. They came, shaken and weary, to our back door on Christmas Eve.

But like a trio of missing puzzle pieces, their presence made sense–fit perfectly–and even more all these weeks later, both to us, as well as to them.

Though we hadn’t planned for a couple from Kentucky and their hound Padmé on the eve of Christmas, they were part of the miraculous Mystery just the same.

After all, like that sacred night so long ago, Someone else was at work–arranging the seeming discrepancies to birth a miracle.

Brushing snow from their coats before hanging them on the hall tree, our son and his fiancée Brittany entered the warmth of the kitchen. Their laughter stirred my curiosity.

“What’s so funny?” I inquired, peering at them through the haze of steaming potatoes on the stove.

“Well, not funny …” Brittany grew more serious. “At least, not at that moment.”

“Yeah, but we can chuckle about it now.” Ian, spying fresh bread on the counter, was deterred. “Mmm. Beer bread.”

“Not until it’s cooled.” I tapped his outstretched hand, the soft staccato sending my message. “Now, what were you saying?”

Drawing back, “Oh, right. You tell it, Brittany.”

Brittany’s son Drake danced at her feet. “Go play. I bet Allie can find a game for you.”

The little boy disappeared into the living room, and Brittany shook her head. “What an adventure!”

I’d only spoken briefly to my husband, and questions swirled in my mind, like the falling snow outside. “Go on.” 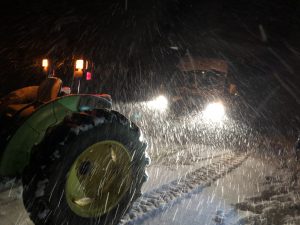 “When we exited the interstate and started up Fines Creek, we discovered an RV with Kentucky tags stuck on the side of the road, up the hill, not far from the landfill.”

“Yeah, and a frightened woman in the driver’s seat,” Ian added. “They were pulled over right about where we got stuck that one year. Remember? On that incline, near the drop off.”

I remembered. “Wow! That’s especially scary when the roads are slick and snow-covered, and it’s dark and unfamiliar.”

Brittany’s eyes were round as saucers. “It was scary! Poor lady.”  She shook her head. “When we approached her, she was frantically gripping the steering wheel, foot pressing hard on the brake. Said something about the windshield wipers freezing up.”

Brittany sidled up to our son and squeezed him. “I told her, ‘M’am, it’ll be okay.’ Please try to calm down.”

“Yeah, to which I added, ‘I’m a volunteer fireman and a police officer’ …”

“‘Which means I am 911′!” Brittany interrupted Ian, then kissed his cheek. “I knew they were in good hands.”

Despite his brown skin, I could see pink rise in Ian’s cheeks. “Well, it’s my job.” He paused, then, “Anyway, Dad should be back with them any minute.”

Right on cue, the door opened, and Bill entered. Stomping snow from his boots, “Wow! How’s this for a Christmas Eve adventure?”

“Man, that seems to be a theme. And here I am, missing all the fun.” I held up a spatula. “You riding a tractor to rescue. Me wielding a kitchen utensil while reading a recipe.”

“Well, we each have our strengths.” Bill bent to kiss me.

Just then, there was a knock. “That must be them,” and Bill opened to a trio of weary travelers.

Stepping onto the kitchen mat, a man, woman, and dog blinked in the bright light, and the couple smiled faintly. “Hello,” came a duet. The dog’s tail waged her welcome.

Introductions were made before Bill led the way to The Potter’s Shed–our tiny house that serves as my writing space, as well as guest house for the occasional visitor. It had already been made ready–bed made, towels laid out, bathroom cleaned. 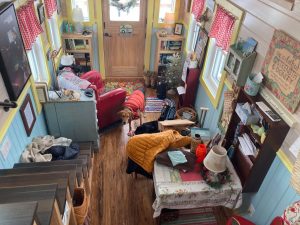 Less than thirty minutes later, Joshua and Lauren returned. Padmé, who wore an orange parka, investigated the unfamiliar territory, our dogs close at her heels. Curious about the canine guest, they made themselves acquainted as dogs do, and our daughter Allie served as social planner. “Padmé, this is Rocky, and this is Prancer.” Taking a container from a kitchen shelf, “Now, would anyone like a Christmas treat?” she inquired, then realized she should ask. “Is that okay?”

Josh nodded. “Of course, she’d love that. Thank you.”

Dinner ready, we gathered–our family of five, our sons’ significant others and children, as well as our guests. Then Bill offered a prayer, thanking God for the season, for His Son, and ” … for surprises who come as strangers but depart as friends. In Jesus’ name …”

And we all sung in harmony, “Amen!”

Plates filled and seats taken, our casual dining room–with the farmhouse table that holds stories of gatherers stretching far beyond our humble family–buzzed with happy, haphazard conversation. Dogs dodged between our legs, determined to be the first to catch whatever crumb might fall from a clumsy human. Salt and pepper were passed, butter spread, and water glasses filled, refilled.

I finally took my seat beside Lauren. We looked at one another–strangers less than an hour earlier. “Eat,” she commanded, and I sighed my contentment.

No masks were worn and social distancing had been checked at the door. It’s not that no one thought about such, that no one wondered, Is this okay? Am I putting anyone at risk?

Far from it, in fact. Those thoughts crossed my mind, and I’m guessing they were on the minds of others too. Still, it was as if we’d stepped into a place of trust–where we abandoned fear and walked instead by faith. Perhaps it was careless, but there was a calm that permeated those moments (perhaps born of necessity?).

We were up-close-and-personal, something that, for the last year, we’ve mostly abandoned entirely, and it felt, in truth, a bit unfamiliar. And yet, at the same time, familial, and therefore, right. Not, It feels good, so I’ll throw caution to the wind, but, rather–

This feels like hallowed ground, where the imperfections of human reasoning meet holy, and I’m choosing holy. 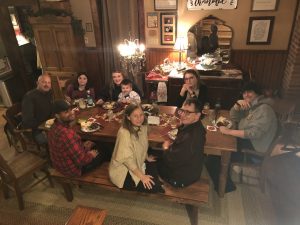 All I can say, as Lauren has also said–we did what we’d not done, what we hadn’t expected doing, as part of our Christmas planning. On the night before Christmas, gathered close around the table, as well as around the fire over the course of the weekend, we were intimate in our conversation. We were intimate in proximity.

We shared stories of both heartache and triumph–nodding in agreement that, often times, the former even leads to the latter. How we can look back, sometimes many years later–sometimes much sooner–and see just how God worked things together for good. How His plan was accomplished–not despite pain and sorrow but, rather, because of one’s pain and sorrow. Working good though pain and sorrow. As Paul wrote–

And we know that in all things God works for the good of those who love Him, who have been called according to His purpose (Romans 8:28–NIV).

Like, for example, the death of a friend’s son–a friend who, as Lauren and I discovered, was a mutual friend. This friend whose other daughter–a dancer and twin to the deceased–dated Lauren’s younger brother. This friend whose other daughter shared the same Jewish lineage as Lauren, yet was in my Sunday School class while we lived in Lexington. Both this mutual friend’s daughters were, in fact, students of mine, and I loved them. 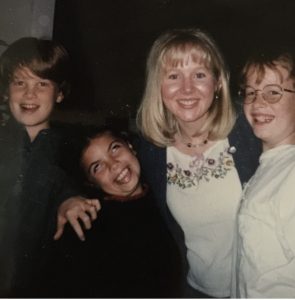 As Lauren and I shared over the course of our Christmas Eve meal, as well as throughout that weekend prior to their eventual departure on Sunday, we learned that we are indeed linked. Not merely by a friend named Katherine from Kentucky, but by something–Someone–greater.

The One who arrived a Stranger to a dark and cold world.

The One who was born of Jewish lineage but lived and died for the Gentile too–that we might be grafted in to that same Family Tree, chosen and adopted.

Oh yes! Adopted–and that’s yet another part of our shared story.

And to think, it all started at the table–on the night before Christmas. 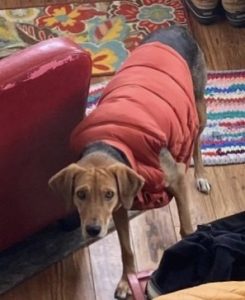 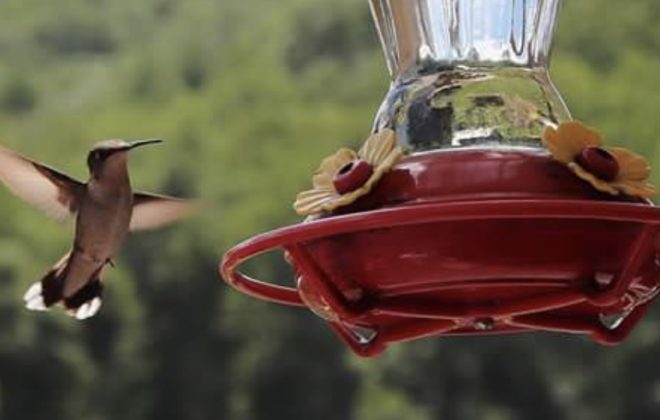 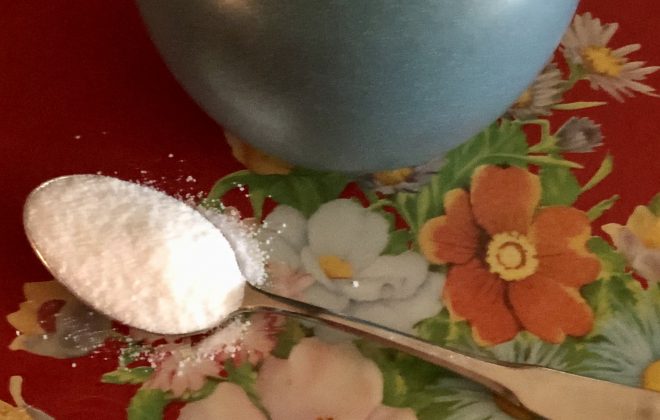 I Bet She Calls Him ‘Sugar’ 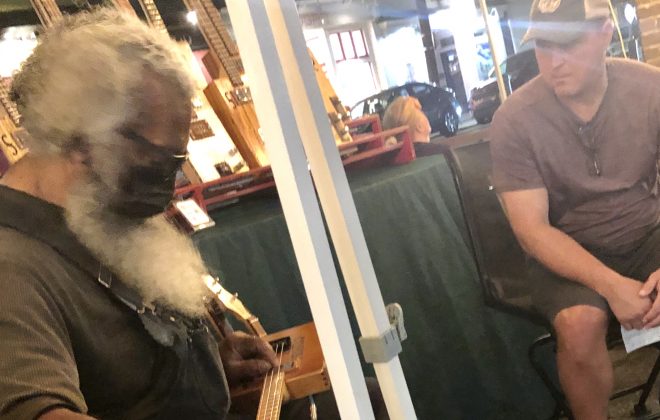 When Guitar Man Meets a Miracle-Maker