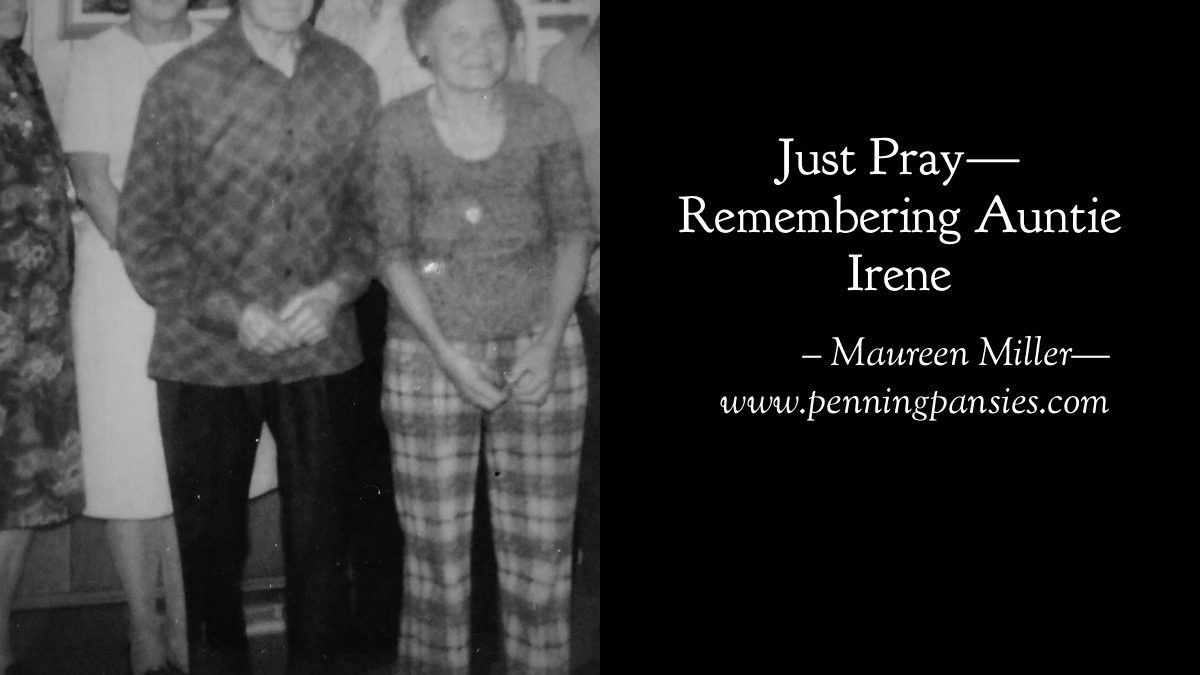 She was only a mite of a woman. Barely 4’8″, Auntie Irene made up for her small stature with sass. Honestly, she looked very much like a tiny Japanese Josei (lady), as do many who are of 100% Finnish descent, which she was.

Irene and her identical twin Lillian were in the middle of the Simonson clan–with three siblings above them (though another sister passed away at only a year) and two below (with two more having passed away as well). My maternal grandpa, Onni Frederick “Fritz,” was the next surviving sibling down from them. Merely toddlers when Grandpa was born, they were fiercely protective of their baby brother.

One story goes that, when he was in elementary school two grades below his older twin sisters, Grandpa was about to be disciplined by the teacher with a crack of her ruler across his hand. The twins wouldn’t hear of it, however, and stole the measuring stick away. Whether or not Grandpa ever received his punishment is a mystery, but the thought of two tiny identical-looking girls standing up for their younger brother brings a smile to my face.

Irene and Lillian Simonson, born on New Years Day, 1910, were placed in shoe boxes to be discovered by their three older siblings under the Christmas tree in the Upper Peninsula of Michigan that snowy morning. Brothers Herb and Dave, along with sister Marion, never forgot that sweet surprise–a double blessing to welcome the new year.

Auntie Irene married Ray Hiltunen, and they had three children. Their youngest, Sarah Lillian, was particularly close to my mom Mary, much like our daughter Allie and my sister Katie’s Ali Beth are both first cousins and best friends. Lillian never married and lived with her twin and brother-in-law in the Detroit area until her sudden passing, the result of suffering a heart attack while dressing for a shopping spree on September 30, 1943. She was only 33.

I loved my Auntie. She was nearly six decades by the time I came along, and because I grew up in Ohio and she remained near Detroit, times with her were far and few between. She had a small, mousy voice and, while only 5’2″ myself, I towered over this tiny lady.

I’ll never forget one of the rare occasions when she visited us. She made her appearance one morning wearing a stylish wig. Katie and I gasped, wondering about the woman who’d rounded the corner from our guest room. Seeing our surprise, Auntie Irene threw back her head and, through giggles, exclaimed, “Well, I thought I’d get all dolled up for our shopping trip!”

She was very sweet, I remember that. Kind-hearted and hospitable, though her home was nothing fancy. On the contrary, it was small and cozy–filled with the things that evoked memories, the material for good stories, like photographs and knickknacks.

I remember exactly where I was the day–March 18th–I learned she’d been assaulted. I was standing in the kitchen of my then boyfriend (now husband) Bill’s house in our hometown. We were celebrating our fourth “dating” anniversary when my mom called to tell me the news.

“Auntie Irene is in the hospital. She was attacked. Raped.”

My mind raced, Mom’s words hanging somewhere in the telephone line between our house and Bill’s. I just couldn’t wrap my head around what she’d said.

“Yes. Today. Left for dead. Someone–an unknown man–called Cousin Sarah’s mother-in-law, who happens to also live nearby, to warn her that she might be next. This woman then called Sarah, who rushed to her mom’s home and discovered her unconscious.”

Slowly the words sank in. “Is… is she going to make it?”

Mom hesitated before replying, “They don’t think so. She suffered another stroke and is in a coma…

Auntie Irene had had a stroke some time earlier which left her nearly blind. She used a cane to get around and kept her doors unlocked, fearing that, if she suffered another medical emergency, first responders wouldn’t be able to get in to her home. The irony made my stomach turn.

“Mom, I just can’t…” I choked. “I can’t imagine that little lady–that kind-hearted, gentle woman–enduring such a heinous attack.” Tears began to fall as the reality of this terrible crime settled, replacing what had been joy only moments earlier with deep sorrow.

And I know she’s in Heaven, with so many loved ones who’ve gone before, and she’s happy and at peace with her Savior. 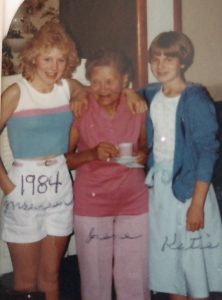 Still, I miss her here. And when I learn of others who’ve been attacked–raped, murdered–my heart hurts again, not only for the victims but for their families. Yes, for those left to mourn their loss, to grieve that their loved one is gone.

I don’t know where Brian Laundrie is, nor do I know the particular details surrounding Gabby Petito’s disappearance and subsequent death. Rumor has it that Brian was seen just within the last 48 hours only several miles from our home here in North Carolina–at an exit only a couple exits further west off I-40. For some reason, he’s on the run, and we’re left to wonder about Gabby’s last moments. What she experienced. How she died.

I know there are people hurting more than me–those closest to Gabby. Those who called her their daughter. Their cousin. Their friend.

But I know that I hurt, too, because of shared empathy–which is understanding another’s pain in one’s heart. And that should be a call to pray.

Because, when we don’t know what else to do, we can do that.

As my mom said all those years ago…

Dear Jesus, we don’t even know how sometimes. Can’t find the words. Some days, all we can muster are guttural moans. But You know. O Lord, You know! And we ask that You intercede on our behalf. Take our imperfect prayers and lay them at the feet of our merciful and faithful Father as pure tokens of broken hearts poured out. Yes, this we pray. Amen. 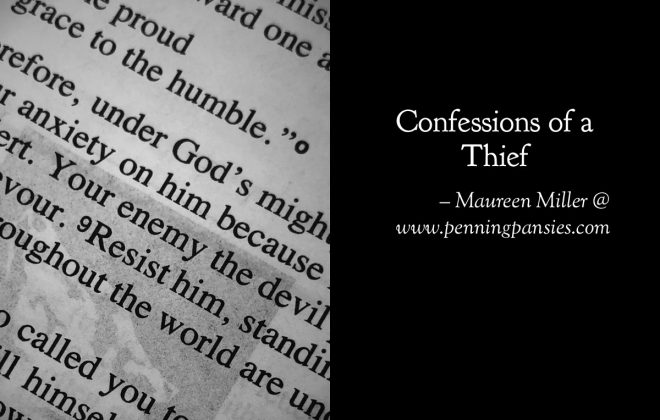 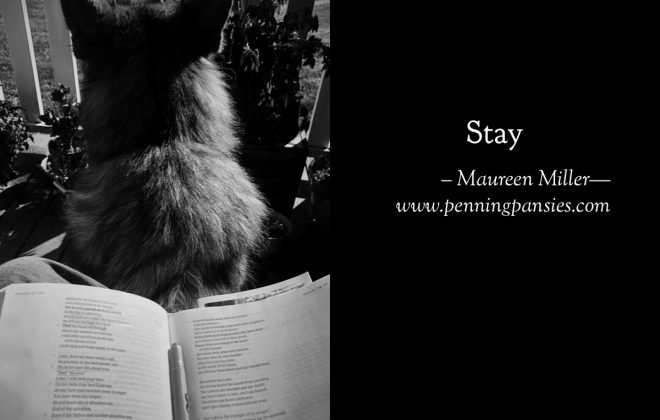 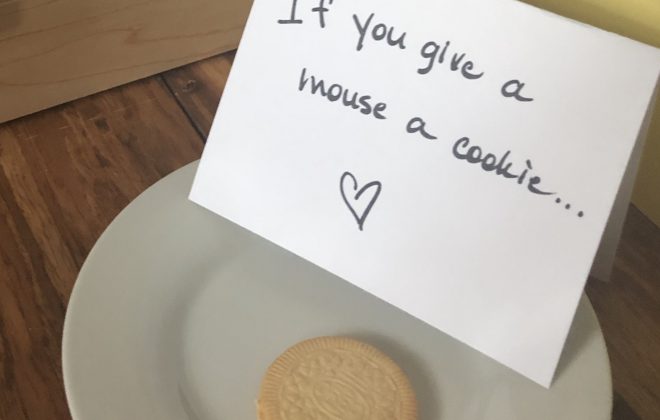 If You Give God’s Girl a Bible