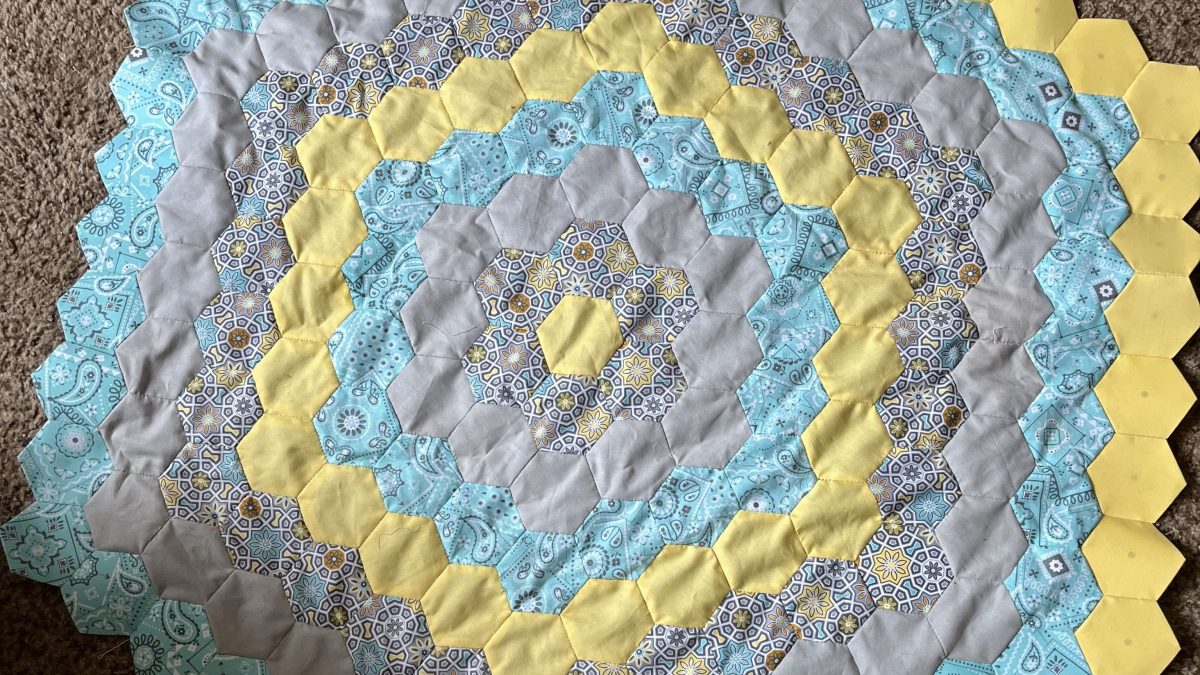 A Covering of His Love–Part 2

“And we know that in all things God works for the good of those who love him, who have been called according to his purpose”(Romans 8:28 NIV).

The special blanket spread out upon our bed is like a covering of our grandmothers’ love. Though each has passed, some many years ago now, the pieces of their belongings–aprons, housedresses, linens, and the like–stitched into the completed quilt are reminders of them. Of their influence upon our lives. 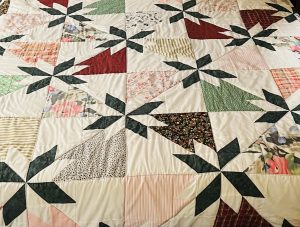 First, sweet Grandma Ella Mae Freshour’s there–her colorful housedress in blues, greens, and reds. Born on February 13, 1923, she and her husband, Grandpa Ray, were married 72 years. She was a godly woman who loved her family–her five children and many grandchildren and great grandchildren–as well as her friends and neighbors. She had smiling eyes and giggled like a girl until the day the Lord took her Home on March 29, 2015. I can still hear her sweet voice, her laugh. Her daughter Faith is my mother-in-love, and she, too, loves Jesus. Bill was blessed by a rich, godly heritage.

Then there’s dear Grandma Ruby Farley. Several of the fabrics in our quilt belonged to her–a housedress and an apron, to name two. Grandma was born March 15, 1929, and she lived to be nine decades–with children, grandchildren, great and great-great grandchildren in her loving care. Also the mother of five–four sons and a daughter–her first husband unexpectedly passed when their youngest was still very small. She then married Grandpa Jim Farley, and he helped raise her children. Their son William “Bill” Miller is my dear father-in-law, and my Bill’s namesake. We were given a rich legacy of loyalty and love in Grandma and Grandpa Farley (who’s still with us)–a blessing in this world of so much change. We miss Grandma, who passed on October 13, 2019.

Grandma Betty Evelyn Gabbard is there–the rich burgundy of her table linen a reminder of her love for hospitality. Born on February 17, 1925, she met and married a U.S. Marine. She and Grandpa Clyde had three children, though their only son Inky was killed when he was still a young man. This tragedy served to draw their family closer, however, and their daughter Linda is my other mother-in-love, having married Bill’s dad “Big Bill” when my husband was still in grade school. Grandma passed away in February 2012, just shy of our daughter Allie joining our family. As I sang at her funeral, “Fly to Jesus” (from Chris Rice’s song)–and we know she did.

Our quilt also has my dear Grandma Alice Balsbaugh Miller’s apron–the black and white floral design simple, like the woman who wore it. Grandma Alice was born February 21, 1906 in a small town in Wisconsin. She loved to sew and cook, and she adored her family–husband Frank Everett and sons Marcus and Joseph (my dad) Miller. Grandpa and Grandma were married nearly sixty years before Grandpa’s passing in 1986. A tiny woman, her five grandchildren loved to measure their height according to the many buttons on her handmade dresses. Because she was German Baptist, a Christian faith much like the Amish, she only wore dresses and each she made herself. (To read more about sweet Grandma Alice, click Wisteria, Enamelware, and Wee Grandma Alice.) She joined Grandpa with Jesus on July 23, 1996, leaving a legacy of lavish love and abundant grace.

And then there’s my sweet and sassy Grandma Helga “Betty” Heikkinen Simonson. Three of her dresses, all handmade, are stitched into our finished quilt. First is the housedress I remember her wearing often–its pastel floral design a favorite. Then there’s the gold and white-striped dress she wore on fancier occasions. Finally, there’s the pink dress she made and wore to our wedding in 1989. Grandma Betty was born at home on June 21, 1915 in Toivola, MI–a rural Finnish community near Lake Superior in the state’s Upper Peninsula. One of eight children, several whom died prior to adulthood, Grandma helped her father farm the land, and she, like several of her sisters, loved to sew. She married Frederick “Fritz” Simonson on June 28, 1949, and they had two children–my momma, Mary Miller, and a son, my Uncle Fred. She truly was the perfect blend of sweet and sassy, and I know Heaven was made more beautiful when she joined Grandpa with Jesus on December 13, 2011, also shy of our daughter coming to us. I so wish Allie could’ve met dear Grandma Betty, who loved to make funny faces and do word search puzzles. (To read more of her story, click Another Season of Isolation–SISU Sewn by Sister Love.)

But I would certainly be amiss to not tell a bit about the creator of our quilt–the woman who God placed in our path, the perfect one to create such a beautiful covering of His love.

Dawn Heath of Damascus, VA is not only a professional quilter but is also a mother of two sons (and two daughers-in-love), as well as a public school teacher. She loves her Dachshunds Baden and Bunde and the chickens she keeps on her small farm. When asked about her favorite hobby, Dawn shared–

“I started quilting when I was eight at the hand of my Mamaw Heath. I quilted for people in college to make spending money. I quilt as a hobby because it relaxes me, and most of my creations go to family [members] now. I do quilts on commission for people when asked.”

Bill and I are so thankful we were connected with Dawn when we visited Damascus last August, and we consider our meeting part of God’s plan. After all, He knew the desires of our hearts, and He knows the desire of Dawn’s too. Now she’s a friend, which is an added blessing!

Having talked with her a bit more deeply, I learned that Dawn has had her share of hard times too–namely her battle with some mental health issues. Thus, quilting is therapeutic for her. With permission, I’ll share more of what she’s told me–

“God has been a central part of my life since I was a girl of twelve. Without Him, I wouldn’t know how to function. My depression and PTSD stemmed from the deaths of my 19-year old brother, my Great Grandfather–who was a beloved friend and mentor–and my Papaw, all within two months of each other when I was only twenty-one. After a suicide attempt, He spoke to me clearly, saying ‘I am here.’ At just that moment, God sent two cardinals. They appeared outside my window and landed just as He spoke these words. Then they immediately flew away. My best quilt was inspired by this life-changing experience, and this one I’ve kept for myself. Honestly, only Jesus got me through that time of so much loss.”

And you know, quilting just seems the perfect hobby for my friend Dawn Heath. As she pieces together fabrics, stitching them with thread, the underside of her work certainly looks a tangled mess at times. But the finished product–that which God can see from its very beginning–represents the ways He works all things together for good, for them who love Him and are called according to His purposes.

And that, my friends, is not only what Dawn believes. It’s the story of her life!

(To read Part 1 of A Covering of His Love, click the title. For more information on how to reach Dawn Heath at Hootowl Hollow Farm and to learn more about her quilts, her email is dawn00.dw@gmail.com.)

Dear Jesus, thank you for our godly heritage–for those who spoke Your truth to us and who claimed Your name over us in prayer. Thank you, sweet Savior, for working things out in our lives, even when life seems messy or incomplete. You are our Friend–indeed, our covering of Love–and You promise to complete that which You’ve started, working everything out for Your glory and the good of others. Amen. 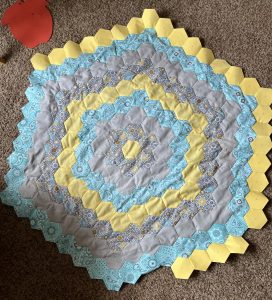 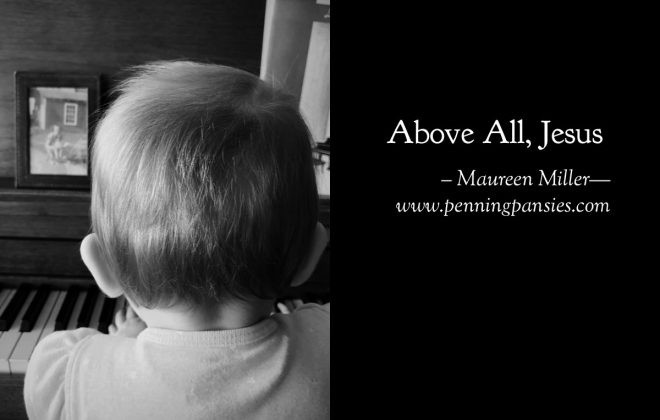 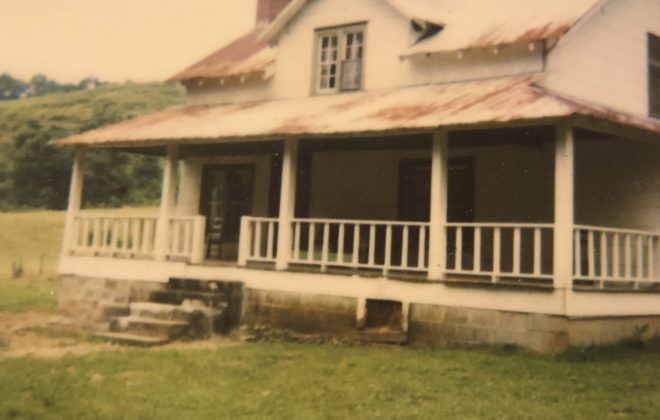 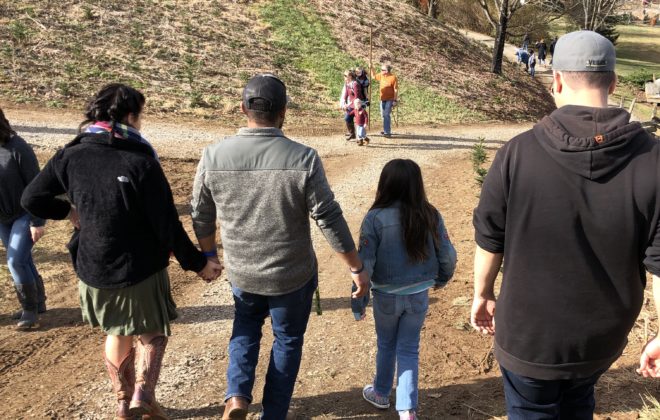